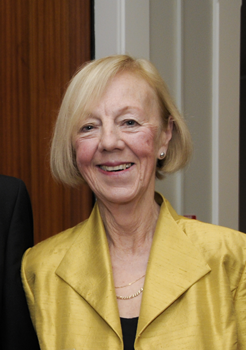 Service to Development and Advancement

Ann has served Scots College for 25 years, starting in 1995 as a receptionist and moving through various roles in marketing and development to her current role of Development Officer. Throughout this time, she has worked tirelessly to build the Scots community, and her professionalism and enthusiasm for her role is inspiring.

As a result of Ann’s efforts the College has well connected Old Boys, successful events, excellent stewardship of benefactors, and a well-connected community. Ann played a major role in Scots’ Centennial Celebrations in 2016, and her extensive knowledge of the Scots family, her enthusiasm for the College, and her superb professionalism proved invaluable.

Ann’s ability to work hard behind the scenes, and then to engage publicly with such warmth and energy, is a rare skill. She has an amazing ability to enhance relationships amongst staff, old boys, students, parents and possible future pupils, which has had a major impact on Scots’ success.

Headmaster Graeme Yule says, “Ann is a true servant of the College and her endless hours going above and beyond are an indication of her commitment to Scots and what it stands for. For many, she is the face of the College, and the person they feel most connected to. She is central to the College’s unique sense of family.”