In his first year at ACG Strathallan, music teacher Josh McKay started a choir, rebooted the jazz band, built a recording studio and is rewriting the curriculum. He has performed on stage nationally and internationally alongside bands like Six60, Tiki Taane, Bad Manners and the English Beat. And after his assembly performance last year, he found 50 students lined up outside his classroom to join the school choir. 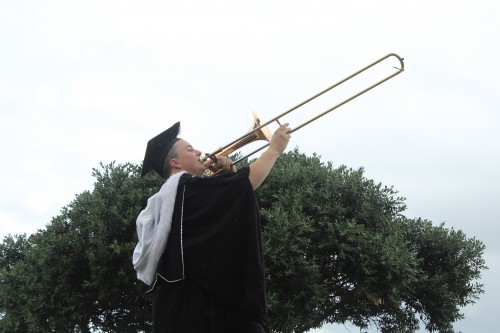 When did you get into music?

I wasn’t really brought up with a lot of music as a child. All I knew was Neil Diamond and a couple of nursery rhymes. The only exposure I had was at my grandparents’ - they had a big old piano, we used to go there for holidays and bash away on that.

At college I told my parents I wanted to learn the guitar, but my brother was already learning it, so they told me to pick another instrument. The only instrument left was the trombone, so I learned that.

Why did you become a teacher?

At high school, I helped students in the music department. I was teaching a student in Year 7 and I literally saw the moment in their eyes where it all clicked. I want to get that out of other students.

What sort of gigs have you played?

In terms of big festivals, I did Rhythm and Vines one year, Sound Splash one year and may play Northern Bass this year. I often play trombone as part of a section for a band who have horns on the album, and need it live; bands say they need a trombone player and a trumpet player and I can cover both of those.

What instruments do you play?

What is your favourite thing about teaching?

Engaging with students, learning what they want to learn and then being able to teach that. In my first week I did nothing except talk to the students about what they liked and what they didn't, and their positives and negatives from previous programmes.

Cambridge offers the ability to tailor a program based on an end result as opposed to having to fit specific standards. I've enjoyed being able to plan my own curriculum around the students.

What’s a highlight of your music career?

At the end of my undergrad degree, I won brass musician of the year for Auckland. The university put me up for it - I didn't even know I'd been entered.

What was it like being a first year teacher?

I did my research when I was applying for jobs and ACG Strathallan looked fantastic. It had a real community vibe, similar to how I grew up.

I was apprehensive as to how well I would perform as it was a sole-charge department with additional responsibilities on top of those of a regular teacher. But hearing about the support network between the ACG schools, and between teachers of other subjects and the senior leadership team, made me want to come here.

How has it been?

I was excited by how well resourced the department is and I just keep thinking of the potential for things we can do with the resources.

There's massive potential here. We have so many students who take external music lessons and are already performing at a high level. There are also students that come in who have had no experience at all and just want to get amongst it and play music.

When I think about what we've done in one year it makes me think of what we can accomplish within, say, seven years, with a full rotation of students from Year 7 to 13.

Tell us about your assembly performance.

Apparently not many teachers perform at assemblies! I did and told students afterwards if they had any musical talent or knowledge or a desire to be part of an extracurricular group, to come and see me.

When I had packed up and come back for lunch time, there was a line of 50 or 60 people out the door. It was really nice to have that response.

What’s your vision for music at ACG Strathallan?

Growing is important. But I would like to consolidate the knowledge, skills and talent in our current bands first. I'd like to continue taking our bands to national competitions and performances – like the Bay of Islands jazz festival, the national jazz competition, the Big Sing and the KBB music festival.

What do you love about music?

I could talk about that all day. For me, music evokes an emotional response that I haven't always been able to define or control. I want students to have an emotional response and then define it, whether through recreating the work and performing, learning the theoretical tools behind it, writing something similar, or being able to just listen and say, ‘I like this part because it sends shivers down my spine.’

My year 10 class have been working on Foley artistry and creating a soundscape. Students take a piece of film, extract all the sound from it, then recreate it. We learn the aesthetics of music, what makes a sound sad, happy or exciting, what creates tension.

We've dropped various objects off the third floor and recorded them hitting the ground to see what they sound like. You do get strange looks from the science teachers and students in the library as you drop an old computer off the balcony into an array of microphones at the bottom!