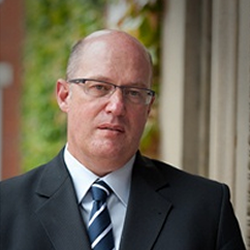 Graeme Yule is the Headmaster/CEO of Scots College in Wellington, responsible to the Board of Governors for all aspects of College operations. In this position, he has implemented the three International Baccalaureate programs and achieved Scots College’s status as an IB World School.

Additionally, he has developed international exchange programs and restructured the College from the two-school model to three schools (including the restructure of over 120 positions and all operational processes.)  These initiatives have all resulted in successfully growing the College roll and improving academic results.  Graeme has also driven a successful capital fundraising campaign to allow a multi-million dollar building development at the College partnering with WETA and Park Road Post Production. He is currently leading a successful scholarship fundraising campaign. He has the ability to foster strong community relationships both internally and externally as shown in the recent partnership to develop the Wellington Phoenix Football Academy program.

Graeme is currently a Board member of the Association of Heads of Independent Schools (AHIS) and is also a member of the full Board of the Independent Schools of New Zealand (ISNZ). He has been influential in the establishment of the IB Schools NZ Group, national IB Awards ceremony and Presbyterian Schools Support Office, and is a member of the New Zealand Secondary Schools Sports Council. He has also served on the Secondary Teacher Education Program Advisory Committee. Graeme has also held a number of governance roles as a Director of the St Pauls’ Collegiate Trading company with oversight of both strategic and operational components for running a successful school retail service. e is the Treasurer of the Taranaki Cricket Association and has previously been a Chair of a School Board of Trustees.