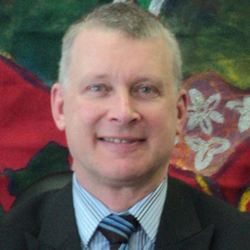 Michael Parry was the Principal of Auckland International College between 2009 and 2013 and has returned in 2017 after four years spent leading the Upper School at the British International School of Jeddah in the Kingdom of Saudi Arabia.

Mike was a high school national level athlete in the UK and a chemistry graduate of King's College, University of London. After graduating from university, Mike initially joined a graduate management training programme with Marks & Spencer, whose leadership principles remain relevant to running schools.

Deciding to change course and become a teacher, Mike taught in and was promoted through four different schools in the UK before heading to Qatar where he appreciated the different cultural perspectives offered.

Now with over 30 years in education, Mike is very happy to be back in the green and open spaces of New Zealand. While his family had wonderful experiences in Saudi Arabia, with a one-year-old boy and six-year-old twin girls, Mike and his wife are keen for them to grow up as part of a New Zealand community.

Michael is happy to be back at AIC where his first task of the new school year was to share with teachers the excellent IB results gained in the May exams by the class of 2017. Mike enjoys the IB curriculum for its academic rigour, both for teachers and students, and because it allows students to show their academic colours in a way that other curriculums do not. He enjoys the motivation of AIC’s students and is looking forward to settling in, watching “any sport” and pursuing his artistic interests.